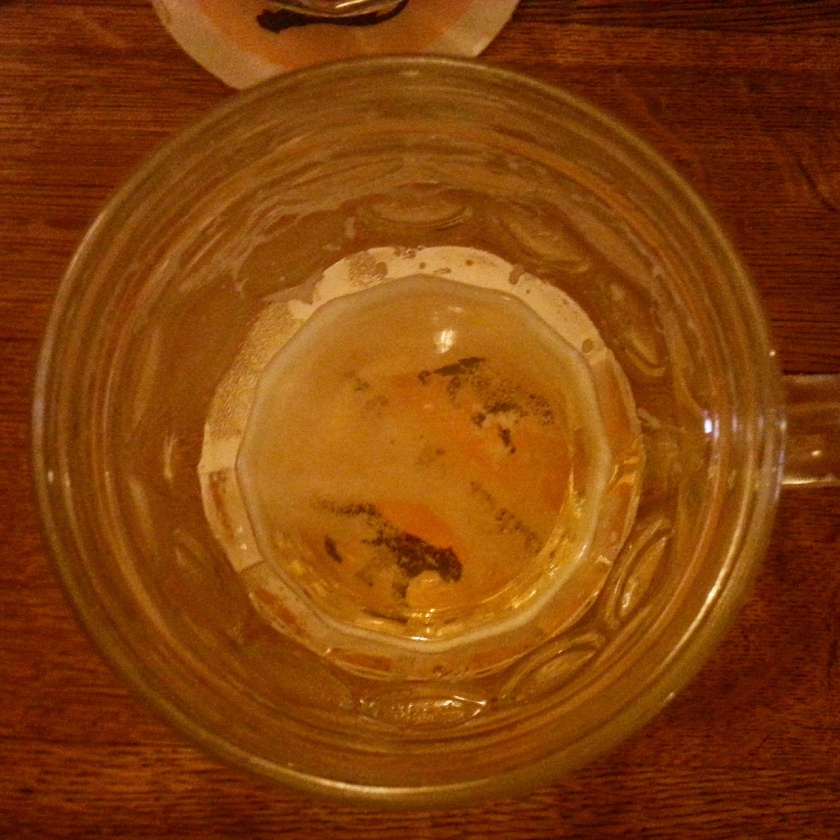 Another pint of Pilsner lands on the table and another mark is made on our card. The server plonks down further pints wherever a glass is in danger of becoming empty, or rather, less than 1/4 full. He then returns to his place at the bar and starts pouring again. Every now and again a tourist will enter and try to order at the bar, only to be told in Czech to ‘sit the f*** down’ (if, indeed, a seat is available). This is more than table service, this is fresh pints on demand before you even ask for them, at Prague’s U Zlatého tygra (The Golden Tiger).

Once more, our mugs of fresh Pilsner clunk together with the satisfyingly hefty sound of marble statues butting heads. Syllabub-like foam packed with fragrant hop oils gives way to the bright, sweet and sharp palate, and conversation fills in the gaps between mouthfuls of beer. The Golden Tiger is pure beer culture, and whilst it is quintessentially Czech, it is a pub that anyone in Northern Europe will find both immediately familiar and refreshingly simple.

As it’s such a singular pub in Prague, it’s fitting that there’s only a single beer available: Pilsner Urquell (40 Czech krone or about £1.15 for 0.5l). In the UK, such an arrangement would typically indicate a heavily branded corporate lounge, the kind typically seen in lager adverts on TV. In reality, The Golden Tiger has more in common with my dad’s village boozer, including its grudging acceptance of non-locals proving they don’t take up too much room. It’s almost exclusively populated by men, sat shoulder to shoulder around long tables on long benches. The walls are decked with Pilsner breweriana and coat hooks at frequent intervals. Vaulted ceilings, stained glass and golden iconography suggest a religious following, but it just feels so pubby. You come in, you take your coat off, you sit, you drink. Eventually, you might leave, but the beer is just so good.

Unlike so many before it, Pilsner Urquell itself has been left largely untouched by the takeover of a multi-national. Here in its homeland, it is enjoyed by the half-litre with a good inch of head, and drank fairly briskly. Czechs believe the beer’s character dies the second its head recedes to expose the beer beneath to light (about twenty minutes), and would rather order another pint than sup the imperfect dregs. That zealous attitude towards beer, appreciating it through drinking it, is truly Czech.

The building the pub is in dates back to the 14th or 15th century, and there is record of it as a beer hall from 1816, thought it is likely to have been in similar use earlier than that, since it gained its distinctive wall relief of a tiger in 1702. It has gained a storied history and a reputation for truly ‘democratic’ drinking (the mayor sits beside a common labourer, who sits beside a famous writer, who is chatting to a visiting Bill Clinton and so on). But unlike many other extremely old pubs I’ve visited, The Golden Tiger feels like a real pub, not just an interactive museum exhibit. I try to judge these historic places in much the same way as a pub built yesterday: not on what it’s supposed to be like, or what its history is, but what it’s like right now, that very moment as a take my seat with a beer.

Pubs after all are buildings that generate atmosphere, whether they intend to or not. Controlling that atmosphere can be difficult and depend on myriad criteria, but that tangible sense of vibe and energy and other such words is what defines the place. The Golden Tiger, with no eclectic beer range or unusual concept relies almost solely on its atmosphere, which is incredible. It actually seems to breathe somehow, with life and noise and beer, and I think that has a lot to do with the rhythm of the place.

As a party arrives and takes seats, the server arrives with a sufficient number of pints of Pilsner and places a piece of card with the equivalent number of marks on it on the table. As more pints arrive, more marks are made on the card. To end the cycle, one must almost physically arrest the bartender in the act, and make it clear that you want your bill settled. Yet most of the time, when the chap returns, looks that say “one more?” are exchanged, answered by the thunk of more mugs of beer. That rhythm of beers hitting the table and the burble of conversation becomes a sort of music, a soundtrack to a flawless scene played over and over for everyone’s enjoyment.

Out of the corner of my eye, I see a man arrive and hang his shiny, multi-coloured tracksuit jacket on the coat hook. On the hook next to it he hangs a thin, flimsy red-and-white striped plastic bag, universally a symbol of a market purchase. He nods greeting to his friend, then looks over his shoulder as if to check his freshly-bought treasures are still there. I can see them through the thin bag: several vinyls, the one at the front bearing the logo of Def Leppard. This is probably one of the chaps Bill Clinton chatted to. I can just tell. I look back to my beer, and on cue the barman arrives with more mugs of Pilsner.

That moment left a strong imprint on my mind. When I reach the last few gulps of a great pint of Pilsner now, wherever I might be, I wonder if I’ll see a golden tiger at the bottom, a glimpse of a Def Leppard record, and look to see if someone is bringing me a fresh glass.

My trip to Prague was sponsored by the generous hospitality of Pilsner Urquell and Mark Dredge, their Beer Correspondent.