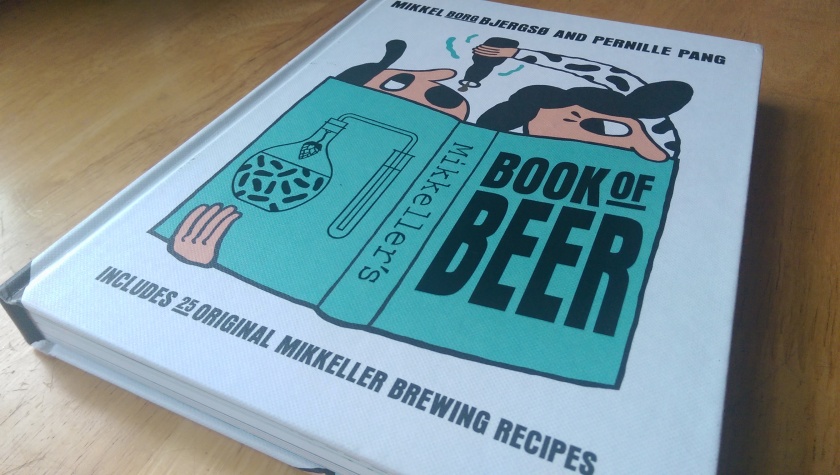 I have a favourite beer t-shirt (no wait, come back), one I bought from Etsy (no seriously, don’t go). It has a vaguely familiar Californian brewery branding aesthetic and the name of the fictional brewery is ‘OBSCURE – Microbrewery You’ve Never Heard Of’. Anyway, I’m not just bragging about my great t-shirt – looking at it the other day made me realise that there is a new level to the joke. Mikkeller, every part the poster-brewery for experimental and uncompromising brewing oddities, pure beer genius and everything inbetween in modern craft beer, is an obscure brewery that everyone has heard of. Production, even when including the many projects all over the world, is relatively low in total, yet the reach is wide, the legacy large and the shadow long. This is the modern brewery, so what, then, is the modern brewery book?

Just as every beer and brewery has a story to tell, so too do the brewers. That compulsion to write their own history, and that of beer too, has motivated a number of American brewers to pen their own bestselling beer books, and we’re now seeing the trend continue here in Europe. Highly anticipated in the craft beer community, Mikkeller’s Book of Beer is co-written by brewery co-founder Mikkel Borg Bjergso and professional journalist Pernille Pang, who is also Bjergso’s wife.

The first chapters of the book feel personal, and the desire to tell his own story in the book’s clipped translated English (familiar to readers of English versions of Scandinavian fiction) makes for a quick and absorbing read. As with anything of this nature, the reader is wary of the authors editing history to suit their narrative, and there is a perhaps controversial recurring habit of measuring Mikkeller’s success by Ratebeer scores alone. Still, it gives a fascinating insight into the mind of a determined and resourceful man across the book’s clean and crisply-laid-out pages.

Of course, much of his story is well-known, and the book proper begins with a potted version of beer history that concentrates on the fun stuff (and, notably, CAMRA), and a breezy trip through major beer styles. The first major problems arise here: for the experienced beer buff, the reliance on heavily debunked myths of style origins may come as shocking, and the IPA section alone might be enough for some people to give up on the book entirely. Meanwhile, the newcomer may find the short, breathless descriptions to lack depth or imagery to capture the imagination, but then, that’s what all the beautiful photography is for. There are also some clumsy paragraphs and phrases that feel like they’ve been wrung through Google Translate, but generally the book maintains an easy-reading pace throughout.

The book’s real appeal to existing beer nerds lies in the selection of 25 recipes for Mikkeller beers and 5 recipes for other brewers’ beers. Whilst laying bare the recipes for I Beat yoU, Beer Geek Bacon and Texas Ranger shows an impressive amount of transparency on Bjergso’s part, I suspect most will be even more impressed by the inclusion of recipes for Firestone Walker Wookey Jack, To Ol Goliat and Kernel Imperial Brown Stout.

The guide to starting homebrewing itself is packed with handy tips, but also comes a cropper from the occasional confusing sentence or questionable translation, which, when on the topic of oxygen in the brewing process for example, is pretty worrying. The whole thing feels useful in conjunction with other more trusted books on the subject (How to Brew by John Palmer, for example) but not a true foolproof brewing bible on its own.

Where the language and tone of the first half of the book is aimed at the beginner, the food section fells far more advanced in some ways. However, it does overcomplicate some of beer and food matching’s basic principles, recommending only sweet beers for cheese for example, yet a variety of beers for different kinds of shellfish, which is perhaps more of an indication of its Scandinavian origin than knowledge gaps.

The food recipes included, meanwhile, are almost exclusively high-end, Masterchef-esque constructions of the most expensive ingredients using the most obscure methods. It’s hard to see anyone who is actually capable of these culinary feats relying on such a text as their guide, but it certainly all looks very nice, and that might be both the book’s biggest strength and its main weakness. The gorgeous design and pleasingly simple artwork from Mikkeller label designer Keith Shore makes for an easy read, but not necessarily an engaging one.

Whilst it is pretty to look at, and will provide a valuable source for homebrewers (as just that, a source, not a bible), this is by no means the ‘Ultimate Guide for Beer Lovers’. With its artistically impressive layout, repeated reliance on debunked myths but tempting recipes and insight into the rock-star brewer’s rise to fame, this is perhaps then the beer book that the craft beer generation deserves, but not the one it needs. Mikkeller’s book is a beautiful one, but requires the context of more grounded works. Mosher, Palmer et al have little to fear.