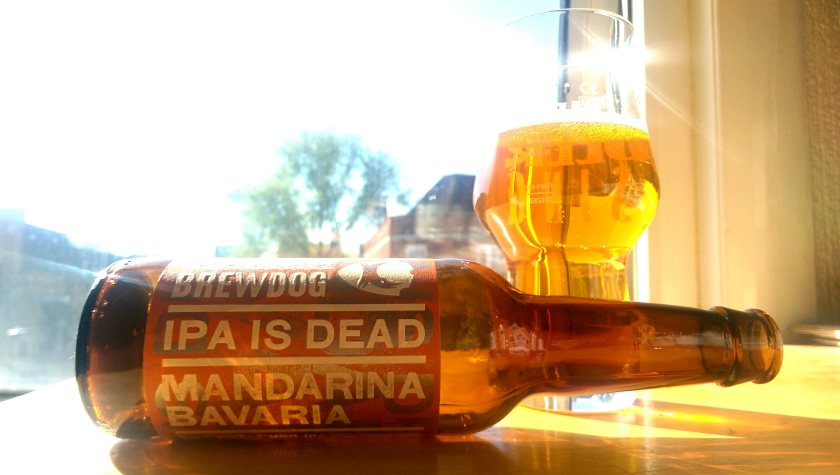 One of the textbook rites of passage for the modern, budding beer geek is to buy ‘single-hopped’ beers to find out the flavour and aroma characteristics of specific hop varieties. With each flavour, some increased knowledge or understanding of it is (hopefully) stored subconsciously, and the next time we experience it, it becomes a little easier for the firing synapses to locate the relevant file of previous experience.

A brewery that has truly committed to the single-hopped idea is BrewDog, which recently released its fifth annual IPA is Dead series. The hops selected are chosen based on a combination of public interest (including suggestions from social media) and, mostly, I suspect, brewer curiosity. With new BrewDog bars opening on an almost monthly basis, it’s getting easier each year to pop along to your nearest one on day of release and order a flight of the latest series to try them out. For some, the appeal is simply to taste something they haven’t had before. For homebrewers and committed beer geeks, single-hopped beers represent an opportunity for personal development and gaining valuable experience.

The thing is, most hops, like most people, are normally only very good at one or two things, and not many people can even claim to be that talented. Single-hopped beers require the hop variety in question to be used at multiple points in the process, instead of just where they would normally perform best. Sometimes the ‘truth’ of a hop’s character is blunted or stymied by it being used at every stage in the brewing process. Others, meanwhile, revel in the challenge and reveal incredible depths, clarity  or raw flavoursome power.

Mandarina Bavaria certainly delivers a lot of sweet orange and pithy peel in its aroma. There’s also something stickier and alcoholic like peach schnapps, perhaps revealing the hop’s difficulty in overcoming the beer’s 7.2% abv. I found the Mandarina Bavaria very sweet, but with a tangy lemon sherbet flavour rather than full-on mandarin. The bitterness is sudden and schizophrenic – twisting juicy fruit into a raspingly dry finish reminiscent of Jever. The strength of the beer was much less evident in the flavour, in fact I gulped it down like it was a juicy and bitter pale ale, so here the hop really shined.

Pioneer, a British hop, can have bright lemony flavours and woody, cedary notes when used well. In a 7.2% IPA, the flavours seem to come down quite hard on woodiness, almost piney in the finish, whilst the aroma was somewhere between warm lemon curd and marmalade. It didn’t quite gel with the strength and malt profile of the beer, but certainly taught me in explicit terms what Pioneer tastes like.

Ella, meanwhile, is an Australian variety related to the super-peachy aroma hop Galaxy and the German bittering hop Spalt. Brewers like its flavour-efficiency, as it can be used in moderate amounts to replicate full-bodied continental lagers, or in larger amounts to deliver massive tropical juiciness. As it’s the only hop in the beer, Ella turned the IPA into a dangerously quaffable blend of sharp bitter grapefruit, tart lime and caramelised peaches. The finish is actually my favourite part, leaving just enough of each flavour to make the mouth water for more.

Finally, Chinook delivered a somewhat predictable hammer-blow. A hop that can be used for bittering or aroma, Chinook is a notably piney and spicy US hop that tends to dominate the finish of any beer it’s used in. It’s a favourite of BrewDog’s so I had a fairly good idea of how it would taste, and I was glad I elected to drink this one last. The bitterness and pronounced pine and woodiness was palate-shifting.

This is the funny thing, though: whilst each of the beers seemed to have markedly different levels of bitterness and hop flavour, all of them were brewed to have 75 IBUs. As any brewer will tell you, that number on the brewsheet is not the same as perceived bitterness in the final beer – the reason why a 45 IBU pale ale can taste less bitter than a 45 IBU pilsner. Brewing each of these beers to 75 IBU isn’t necessarily the best showcase of each hop, and often, individual hops, like people, perform best when partnered with others that have different strengths.

Since this was the first time I’ve had all four of the series in bottles at home, so I couldn’t resist flipping the concept on its head. In previous releases, the hops used for IPA is Dead were often so diametrically opposed that it would never occur to many people to try blending them, but this year’s release seemed to have traits that could work in unison. After opening each bottle I poured roughly 100ml into a growler that I kept in the fridge, and after tasting all four I had an equal-parts blend of each beer.

The result was surprising, in that each of the component beers could be tasted and seemed to interact with each other – the resinous spike of Chinook evened out the peachy syrup of Ella, the lemon and orange in Mandarina Bavaria softened the bitter, woody tang of Pioneer – but whilst it broadly worked, it was not in any sense a complete beer. Each beer had used its hop at all addition stages, for bitterness, flavour, aroma and dry hop, so the positives aspects were spread thinly across the palate. What would be more interesting, would be if the IPA is Dead series starred a fifth beer, where the brewers used the hops from the four single-hopped beers in different proportions at different stages to best suit their characteristics. Just as important as learning what hops taste like when working alone, is learning how they can work together. The lessons learned from the flavours of the single hopped versions could be galvanised in the the fifth, when you see how and when they should be used to best effect together. What do you think?

Thanks to BrewDog for sending me this year’s IPA is Dead series.