For a restaurant, finding a niche is a dangerous business. Too obscure, and you become something that people only visit once, at best. Too mainstream, and you suffer the same fate. Why bother going back to something you know is nothing special?

Free range chicken and eggs, in that case, may sound like the worst of both worlds – weird yet mundane – but Whyte & Brown is a genuinely different and interesting restaurant that is even more valuable to seekers of good beer.

This is the chintzy, brand-splattered cobbles of Carnaby Street and Kingly Street, where truly good beer is restricted to the occasional handpulled gem or bottle of Punk IPA at nearby Nicholson or Taylor Walker pubs. This whole area of London is a gamble for beer geeks. The few bright lights therefore shine ever the brighter, and W&B, nestled in Kingly Court, deserves recognition for this alone.

If a pub or bar, and a really good one at that, had the likes of Beavertown Gamma Ray, Redwillow Wreckless, Hardknott Cool Fusion and Pressure Drop Pale Fire on the menu, you’s sit up and take notice. Now imagine a restaurant that has that kind of beer range. A restaurant that sells things like shards of crispy chicken skin as a snack. Now I have your attention.

It doesn’t stop there. W&B even got Redwillow to brew their house ale: Whyte Draught, a clean and floral pale ale that has those Redwillow hallmarks of balance and clarity. I was invited to a evening of food and beer at the restaurant last month, and had a fantastic time. Toby McKenzie of Redwillow was there, along with Justin from Moor Beer, and a few friendly faces from the Twittersphere. We were treated to a seemingly endless feast of chicken. Chicken thigh-meat coated, Thai-spiced Scotch egg, Harissa chicken hot hot hot chicken wings, the restaurant’s signature Brick Chicken (more on that later), and pulled chicken thigh meat in a delicious BBQ slider. All the beers were there, and we were encouraged to find our own matches, and share our findings. This, as a side note, was a really pleasant and social way of doing that kind of event. No script, directions or explanations; just food, beer and chatter. Lovely.

I had a wonderful evening at W&B, and raved about it to everyone I talked to afterwards. Then I came across a couple of very shirty, sniffy reviews of the place online, by actual food critics. Both questioned the place’s reason for being. Being just about high-quality chicken and eggs was not, in their eyes, enough to validate the restaurant’s existence in London. I truly hope that I never grow into the kind of joyless, whining, misery-balloon that cannot tolerate a restaurant’s existence purely because it doesn’t meet their idea of what’s supposed to be in London. Both of these reviews missed a very key point that I think is of the utmost importance: WHAT ABOUT THAT BEER, HUH?

Seriously, though: W&B’s beer menu is a small and perfectly-formed marvel that gives me hope, real hope, that there might be more restaurants like this one day. So many existing excellent beer and food places are beer places first, or are owned by breweries. It was so refreshing and heartening to come across somewhere that had a very specific food vision, and also just happened to absolutely get good beer being a part of that.

Anyway, I resolved to return to W&B. I thought that maybe all the beer and fun had clouded my perception. Was the chicken really that good? So I sat outside – the place has a lovely chunk of Kingly Court to enjoy the last crumbs of summer and autumn in – and ordered a bottle of Pressure Drop Pale Fire with another plate of the magnificent Brick Chicken. Because that’s what it is: magnificent. Marinated chicken breast cooked under a brick to moist, juicy perfection; 24-hour slow-cooked chicken thigh and a slow-cooked wing. It comes with a jug of gravy so good that you should be able to order it as a beverage. Sharp, juicy, citrusy pale ale and crisp-skinned, moist-meated chicken. If that’s not a reason for a place to exist, then I don’t know what is. 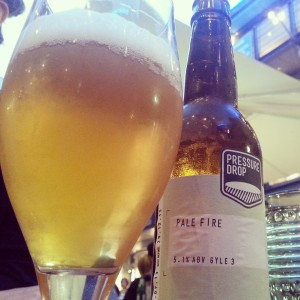 LEADING IN MEN'S FASHION (Führend in der Herrenmode) is a pretty good way of describing hazy IPA I guess. Definitely one of my faves from @pressuredropbrw and really glad to see it make a return.
Satisfying.
One Boshko please 🐾
The big British Cheese Weekender is almost upon us. Check out the virtual events featuring @cheesetastingco @craftbeerchannel and more and get yo cheese on.
Clocking off bevs don't get much better than this @trackbrewingco Table lad. Easy listening juice for the soul.
Start the day right.
Always nice to see different barrels used for big stouts. This hefty lad from @roundcornerbrewing picked up beautiful rounded vanilla and caramel notes from the rum barrel, without some of the more cloying booziness you might get from Bourbon for example. Excellent base beer too. Super balanced and a lovely Sunday evening sipper.
Essential for that pretending to be outside vibe 🏝️🌄
Monday motivation
I call this 'pub LARPing', with @howlinghops Passing By.
Lockdal Lyfe
My long weekend in a nutshell.