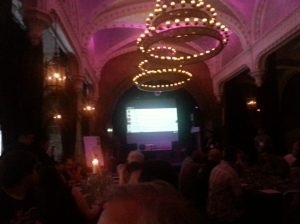 The second day of the European Beer Bloggers Conference 2013 had a packed agenda, and featured really useful and insightful talks from some of the leading lights of beer writing. There was also the extremely exciting Live Beer Blogging event, which saw some incredible beers being poured. Below is a recap of what happened with some photos from the various sessions. As ever, you can read the in-depth coverage of EBBC13 on the Live Blog written by Sam Parker and I, built by John Read. 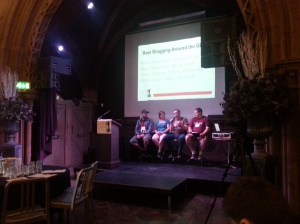 Beer Blogging Around the Globe

The day opened with a panel of beer bloggers from Ireland, Poland, Norway and the USA discussing the challenges of beer blogging in their respective countries. There was really interesting explanations of the various legal difficulties that have recently cropped up in the US, such as disclosing whether samples were sent to you by breweries. This was met with what Craig Heap described as a ‘very British, quiet outrage’. Meanwhile, in Norway, brewers aren’t even allowed to use promotional images on their websites! There was an overall positive feeling to the discussion, as each panellist set out what they were most looking forward to in the future. I covered the panel’s discussion on the live blog here. 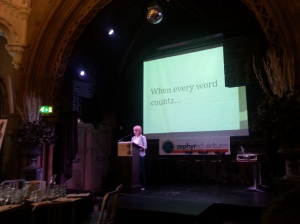 Drinks Writing – When Every Word Counts

Susanna Forbes of DrinkBritain.com gave us some in-depth and detailed advice on improving our writing and our blogs’ effectiveness. There was really great information here, and I understand that Susannah’s presentation will be uploaded to the EBBC website for us all to enjoy. Sam covered Susannah’s talk in detail here on the live blog. 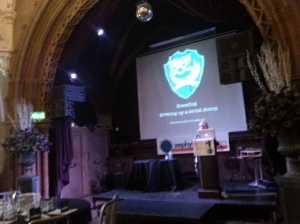 BrewDog’s in-house social media and marketing specialist Sarah Warman, formerly of agency Manifest, gave a really insightful and useful talk on the effective use of social media. We saw BrewDog’s strategy and the social media platforms they use, and Sarah was very good at identifying what works for BrewDog, and what might work for bloggers like us. Some of us even signed up to new platforms there and then! Read my live blog of Sarah’s presentation here. 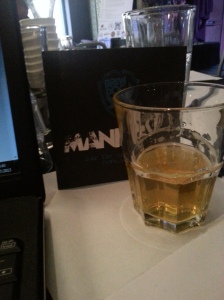 Beer Sommelier Sophie Atherton (whose blog is A FemAle View) hosted a double-edged talk, first discussing what a Beer Sommelier is and how it has benefited her career, and secondly hosting a beer and food matching event. There was a simple yet wonderful selection of charcuterie and cheeses provided by Vintage in Leith, and we were encouraged to find the best beer matches ourselves. The beers were the crisp and fruity Sixpenny IPA, Fuller’s classy Black Cab stout, and a slightly lifeless mini-cask of Adnams Broadside. Many noted that it was hard to find ‘excellent’ matches. However, a really interesting discussion then ensued about how all of our many different opinions prove the subjective nature of food and beer matching. Sam Parker covered the session on the live blog here. 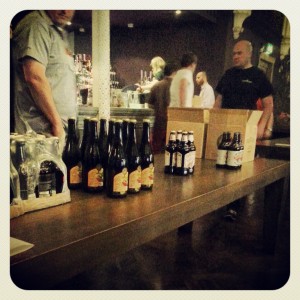 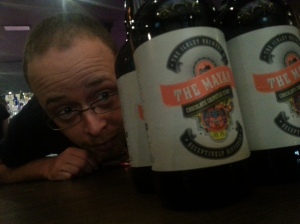 Ilkley’s The Mayan (as modelled by Leigh Linley) 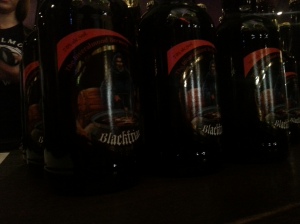 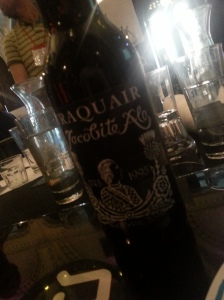 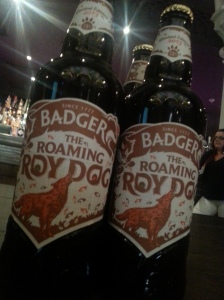 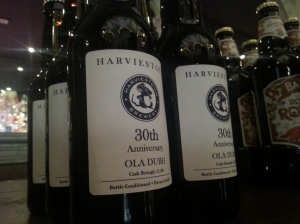 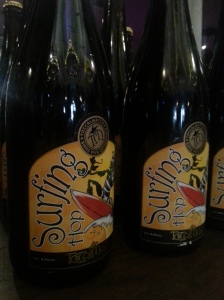 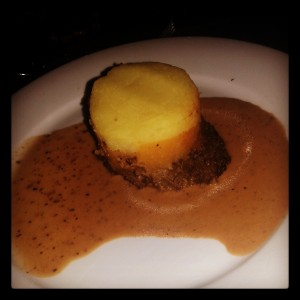 Arguably the highlight of the weekend, the final dinner saw Williams Brothers and Fyne Ales go head-to-head at a sumptuous beer and food banquet. This was a non-stop delight. The starte of haggis, neeps and tatties was served with a whisky and peppercorn sauce, with matched sensationally with Williams’ Fraoch Pictish heather ale. The spicyness in both the beer and food met halfway, bridging the savoury haggis, sweet suede and potato with the soft, rounded herbal flavours in the beer. The Sanda Blonde from Fyne was too bright and citrusy to match this meal, but it did serve quite nicely as a palate cleanser or, as Gavin Frost put it, an amuse-bouche. 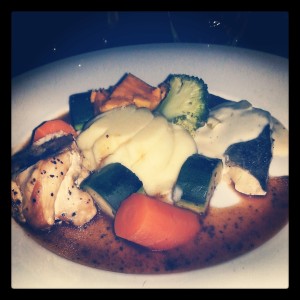 The main course was double-whammy of chicken stuffed with black pudding, alongside sea bass and a sweet potato fondant. I wasn’t sure what the sauce was that came with this meal, but it was wonderfully savoury. The chicken was a little dry, but the sea bass was delicious, and went incredibly well with Fyne Ales crisp, hoppy, citric and sweet golden ale Jarl. Williams’ Citra Sitka was also served with the main course, but went best with the sweet potato fondant, where the sweetness in each boosted and the enhanced each other. 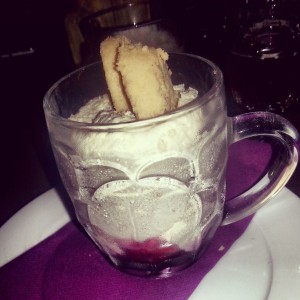 Last but not least, for dessert we were served a traditional Scottish Cranachan, which was basically half a pint of clotted cream with raspberries, heather honey and whisky. Ours didn’t seem to have much of whisky character to it, but there was TONNES of cream, which is good if you like cream. The shortbread biscuits tasted a bit cheap, but it was overall a very indulgent dessert. For this we were served Stravaigin, a collaboration brewed saison/blonde ale from Williams and Stillwater, and Fyne Ales Superior IPA. The Stravaigin was a nice match, cutting through the cream and enhancing the fruitier aspects of the dessert. The Superior IPA didn’t really match at all, being way to overpoweringly hopped. It was just fine on its own as an after-dinner aperitif. As a competition, I think it was a score draw between Williams and Fyne. A great evening.

Afterwards, many bloggers headed back out into Edinburgh, and found themselves in the favourite venue of the weekend – the Hanging Bat (also now known as the Banging Hat). It’s a fantastic bar that any beer (or indeed gin) geek should visit. It was unseasonably hot in there, but I think all who visited the Hanging Bat would agree it captures Edinburgh beer-loving, party-hard spirit perfectly.

Next time in The Beer Diary – What did EBBC13 all mean, and what did we learn about the future of beer blogging in the UK and Europe?