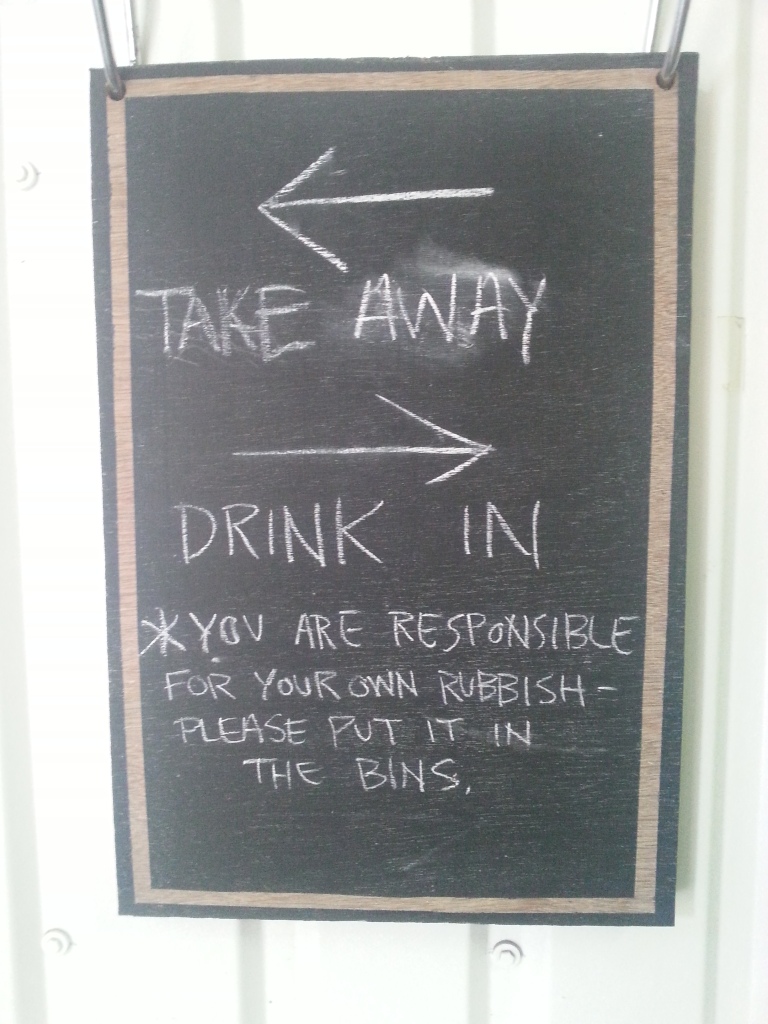 In a series of four features, I will be examining the beer culture in four countries through the lens of a particular event. This second part looks at the all-new craft beer institution that is the Bermondsey Beer Mile and just how varied and mature the London beer scene has become. Read Part 1, featuring the W-Ales Beer Festival, here.

The Bermondsey Beer Mile is so craft it hurts. Five microbreweries, ranging from the fresh-faced Anspach and Hobday to the more established like Brew By Numbers and Partizan to the already legendary like The Kernel, are dotted along a line (easily over a mile if we’re being pedantic, especially if you travel in an irregular fashion) in east London. I joke to people that in the future, archaeologists will incorrectly reason that railways were built to connect all the capital’s breweries. In Bermondsey, you would be forgiven for thinking just that.

No sooner had ‘The Mile’ become A Thing than people were complaining about how busy it was at every brewery. Beer geeks could be seen plotting innovative strategies of ‘tackling’ the Mile on Twitter, trying to outwit the hordes and be front of the line for a fresh 2/3rds at each brewery. The reality is that it is a bit difficult to do it in a straightforward way, but I think that for some people that’s part of the fun.

So what’s the appeal? Well, generally speaking, the Bermondsey Beer Mile offers some of the best beer in London, at relatively low cost (£3 for 2/3rds of a pint, unless otherwise indicated) and the opportunity to drink as fresh as is feasibly possible. When done in a group of fellow seasoned beer enthusiasts, it can make for a wonderful day. Also, naturally, it gives one a rather profound insight into how ‘craft’ is doing in London right now, so on 14th June I made the journey to Bermondsey and did the mile with some excellent drinking partners.

In Brew By Numbers, where our Mile began, we have a brewery rapidly graduating into that ‘2011-2012 Kernel’ sort of phase, where almost everything they do is brand new and quite exemplary. I love the branding, but the actual numbering system is a bit annoying to me still (who asks for the number at the bar and not the beer ‘s name?). After an exhilaratingly crisp and juicy Motueka and Lime Saison, I ask for a Session IPA Mosaic and, like my fellow Milers, am simply blown away by it. The aroma is a spectacular bouquet of tropical fruits that comfortably makes the case for ‘fresh is best’. The beer’s palate is like an electric conduit of lime, orange and mango jacked right into your tongue, ripe with pith and bitterness. The vibe at BBNo is very laid-back, with a very simple layout of benches outside that encouraged a sociable drinking atmosphere. Given how great their beers are tasting at the moment, they may need to work out how accommodate far greater numbers of people. 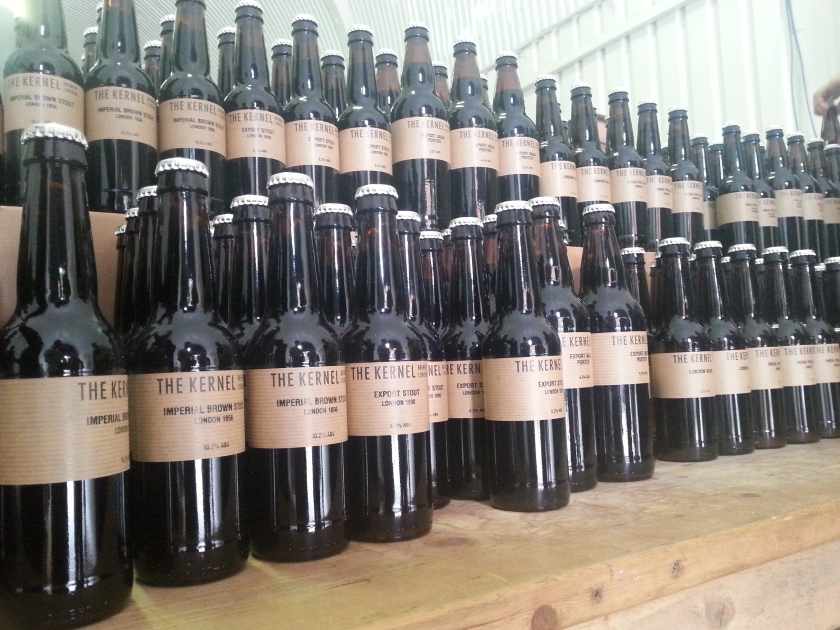 Meanwhile, at The Kernel, now closing early (at 2pm) due to its arch-busting popularity, we are greeted by nothing less than a fort of iconic brown paper-clad bottles. The last time I was inside The Kernel, it was a cave of pallets, bottles, boxes and just stuff. Now it seems sharper, more organised, not corporate but certainly a professional appearance honed by a growing legion of fans and regular custom. One cavernous arch is given over entirely to customers, seated or otherwise. Some fantastic beers were on draught, including the collaboration with Camden Town Brewery, Gentleman’s Agreement, a barrel-aged blend of Camden Gentleman’s Wit and Kernel London Sour. It’s a truly stunning beer, its apple-skin and sharply sour edges injected with lemon and grapefruit juiciness and rounded by tannic, oaky notes. It’s a technical marvel – enormously flavoursome and complex for a beer at 4.3% abv.

There is a very promising trend in blending and barrel-aging at the moment, something that really shows a maturation (no pun intended) of the British beer scene. Sure, we still love to throw hops at beers like there’s no tomorrow, but we’re also experimenting in esoteric methods and using real skill to – and I mean this as a verb – craft beer. I expect to see more of this in the next year, as the more accomplished new breweries each seek to up their game in this area.

After The Kernel came Partizan, which was tricky to find. It required traversing an active (and very noisy) building site and following an extremely ‘craft’ hand drawn cardboard sign. There were more cardboard signs inside, at the tiny bar in front of Partizan (formerly The Kernel’s) brewkit. The beers on offer included some delectable-looking saisons and IPAs. Another trend I’ve noticed of late is beers infused with different types of tea, and I’ve enjoyed pretty much every one I’ve had. The one on offer at Partizan, an Iced Tea Saison, was too tempting to resist, especially at its sensible strength of 3.9% abv. Unfortunately, it was just a bit too thin, with not enough tea flavour to justify its name. When I think of the best tea-infused beers I’ve had, they tended to be bigger bodied styles – IPAs and porters, so perhaps a different approach to the saison recipe is needed as well as using more tea. Still, it was further evidence that the more established breweries on the Mile are Thinking In New Ways. Partizan are great brewery and I’ve no doubt that, with their track record, they’ll master this style in no time. 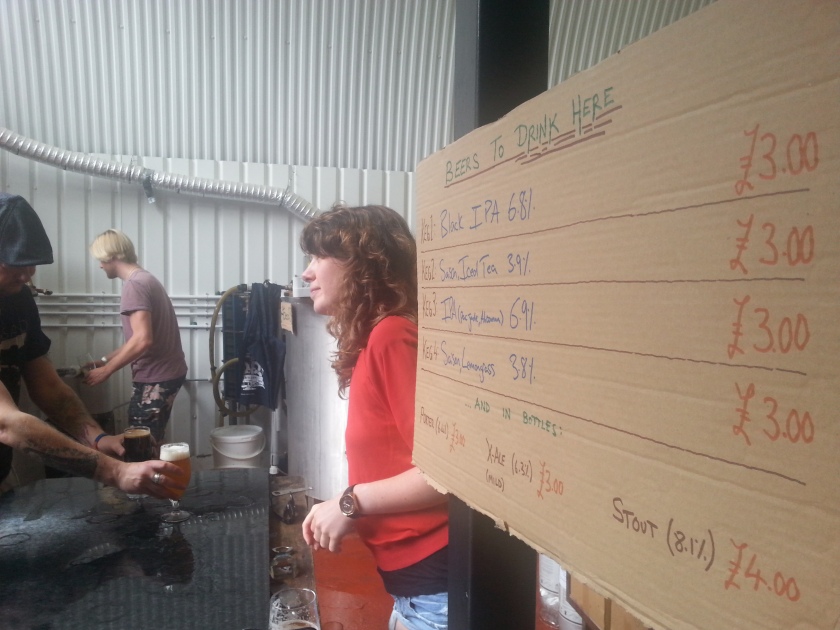 At the next stop, Fourpure, tucked away in an industrial estate at the other end of The Mile, we have a glimpse of the future, or at least an alternate version of the present. This is an example of The American Way: a shiny new brewery with towers of brightly-coloured cans, a brewery tap bar slinging schooners of the freshest draught beer and, naturally, a ping pong table next to the canning line. The friendly bubbling of beery conversation around long tables is occasionally punctuated by a ping pong ball bouncing off a piece of brewing equipment or a tower of hollow aluminium cans. Special mention must also be given to the pulled pork sausage rolls available at the bar, which were nothing short of majestic. It’s a warm and welcoming place, but then it has to be, given that it’s the furthest flung of the Bermondsey Mile breweries.

Here, many of us partook of another Session IPA, though Fourpure’s example was a subtler and smoother beast designed to be enjoyed by the six-pack. Still, it was refreshingly crisp and had some nicely nuanced depths to its hop character, though it’s certainly not the fireworks of the Session IPA Mosaic we had at Brew By Numbers earlier that day. There’s certainly a lot of ‘Session IPA’ going about in London now, which is a very American take on something we already do quite well – fresh, bright hoppy pale ales. I don’t have a problem with the name exactly, and it doesn’t matter what we, and I mean beer geeks, think of the name. Ultimately, if consumers as a whole find it useful, it will stick around, just like so many beer style names in the past. 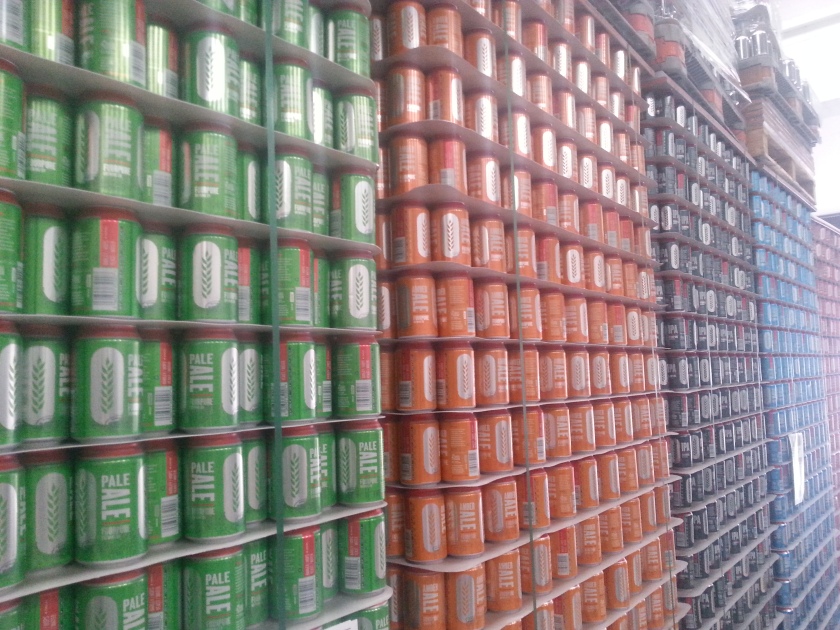 My Mile ended somewhat inauspiciously at the opposite end from Fourpure, in the arch shared by Bullfinch and Anspach & Hobday, a brewery of which I am rather fond. I hold A&H’s Smoked Brown, Table Porter and IPA in high regard, particularly for a such a new brewery. Whenever I have had their beers from the bottle or at a Craft Beer Co, they’ve been sublime. Their Smoked Tea Porter, a recent collaboration with Melissa Cole, hit all the right notes and was impressively balanced – one of the best tea-infused beers I’ve ever had. Unfortunately, this particular visit saw some fellow Milers given some below-average beers that seemed not entirely ready to serve, and there was one glass of The Pale which took London Murky to its extreme. The beer was everything that unfined beer critics would just love to be served: an opaque liquid the colour of a manilla envelope that couldn’t have finished fermenting. The beer was exchanged but not taken off sale. Concerns were raised with the brewers and were duly noted, but it was still a low point on which to end the Mile.

There’s a lot of spite and anger about unfined and unfiltered beer at the moment, much of it directed at new brewers, some of whom are even accused of deliberately ‘murky’-ing their beer to be ‘cool’. The fact is that many of these newer brewers simply do not have the technology to stop their beers being as hazy (and I mean hazy, not murky) as they are, and many are often trying to meet exceedingly high demand for their beers. However, there is no excuse for charging money for a beer that should simply not be served, and this was one of those instances. This time A&H fell short, but I have no doubt that on another visit, I’ll have a great beer from them. It’s just a matter of being more patient with their beers, and being absolutely certain they are ready for sale. They can only lose out by trying to serve beer that will harm their reputation, just in an effort to be part of The Mile’s buzz.

You might think that this all adds up to a very mixed review of The Mile, and you’d be right. As a measure of where craft beer in London is right now, the Bermondsey Beer Mile is perhaps more indicative of the ‘bleeding edge’ – barrel-aged blends, tea-infused saisons, session IPAs and gleaming canning lines – but it’s an edge that cuts both ways.  The fact is, The Bermondsey Beer Mile, this dazzling rainbow of London craft beer in its many forms, approaches, intentions and futures, is a murky beast indeed. The Mile needs time and a stronger sense of cohesion to become the finely-honed showcase of the best beer in London. A nice start might be a collaboration brew from the five breweries involved. I hope that over the summer the Mile is shaped into something we can proud of. As it is right now, I’m willing to be patient. Great beer deserves patience and London deserves great beer.

In the next part of Four Nations of Beer, I review the controlled chaos of BrewDog’s shareholder AGM 2014, and see if Scotland’s brightest burning light is still at the front of the ‘craft beer revolution’.