It’s fair to say that there are quite a few beer mail order services now and not just those from the ‘standard’ retailers, either. Several companies are now providing a ‘selection box’ style approach, which can be helpful to people with an interest in the modern beer scene but unsure where to begin or what to try. Beer52 are just such a company, and I was kindly sent a free box to try.

The deal is: for £24 per month (including delivery), Beer52 will deliver you a box of 8 selected beers. You’ll get a bit of info about each and suggested food matches. You can also use their ‘Beer Shed’ on their website to order more of the beers featured in their boxed selections.

I was interested to try the selection I’d been sent for several reasons. Firstly, several were from Scottish brewers I haven’t tried beers from before. Secondly, whilst most of the stuff was at the pale end of the spectrum, they each seemed to be from breweries with little in common. Lastly, two of the beers (a disproportionately high number when the total is eight) were from the reviled Brewmeister brewery.

Still, there’s a lot to like about the box’s presentation. I liked the idea of the brief beer and food matching guide on one side of the box. A bit overly simplified (‘Wheat -> Sushi’ might only yield interesting results with witbiers, I think) but still a nice thought. Each box also comes with a little leaflet with some info about each of the beers, which was quite helpful but not all beers had food matches, there were few typos and the Brewmeister copy was just repeated for both beers.

I told myself I would give the Brewmeister beers a fair review – they deserve no more or no less. Ridiculous, error-strewn label copy and paper-thin reputation aside, I gave both beers every chance. There were also some predictable beery gems in the box too, and some quite pleasant surprises.

Here are my thoughts on the beers:

Deeside Brewery Craft Lager (4.1% ABV) – A very lively, crisp lager with fairly high carbonation. It’s quite lemony, but perhaps overly sweet, with a sharp, herbal bitterness that reminds just a little of a Belgian wit. A good lager but not as great as its ‘premium’ label might imply.

Scottish Borders Brewery Foxy Blonde (3.8% ABV) – Can’t figure out the reason behind the name. Was there a sleazier previous version of the label, or is it a tenuous nod to their “plough-to-pint” (farm-to-fork? glass-to-face?) rural credentials? At any rate, it’s an easy-going, fruity golden ale. A proper citrus zing to the first few gulps and well-conditioned too.

Fyne Ales Sanda Black IPA (5.5% ABV) – A beer I’ve enjoyed before, but rarely seen this far south. Technically impressive and highly accomplished, doing that Fyne trick of astonishing balance regardless of style or ingredients. It’s juicy white grape, gooseberry and lychee on a chocolatey base. Hard to fault.

Whale Ale Co Pale Whale (3.8% ABV) – Very bright, very pale beer but ‘normal’ almost to a fault. It’s mostly good: light, zippy citrus notes and a biscuity malt base, but it just seems a little too thin, perhaps due to a slightly rough, papery finish. Suspect it might be bad bottle, but would definitely try again on cask. 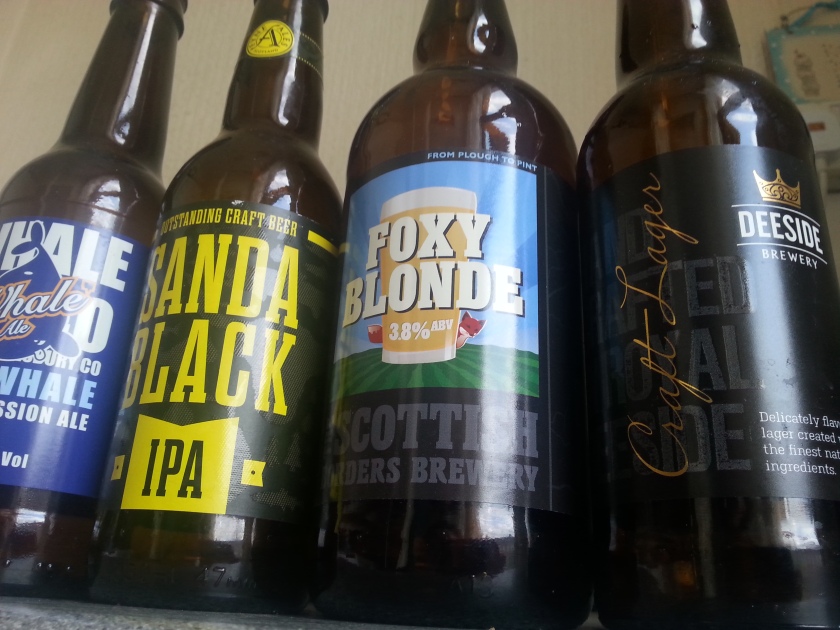 Brouwerij De Molen Pale Ale Citra (4.8% ABV) – It’s been a while since I’ve enjoyed this masterful single hop beer. The balance of grapefruit juiciness and tartness with the carbonation’s prickliness and malty caramel is sublime. It’s one of those beers that conveys a real sense of its careful construction – unmistakeably brilliant brewing.

St Andrews Brewing Co India Pale Ale (5% ABV) – A lively pour of vibrant autumnal red-hued amber beer with a big, aromatic head. There’s lots of orange peel, a bit of lime, pepper and pine in that aroma, which translates onto the palate with a full, punchy bitterness. It gave me favourable impressions of Anchor Liberty and White Shield, and I really like the label.

Brewmeister Black Hawk (5% ABV) – Reddish brown ‘dunkel’. Hugely over-carbonated. The aroma is burnt sugar, toast and faint coffee, but very thin. The palate is very crispy in mouthfeel, very sugary, some faint coffee, acrid charcoal notes, a peppery roughness to the finish which is sharp and yet somehow flat. A catalogue of errors that never really comes together, and is unpleasant after a few gulps.

Brewmeister 10 (10.1% ABV) – This ‘nuclear-charged bock’ is more like super-charged Doom Bar. Bocks are admittedly on the sweet side, but there’s almost no bite, dryness or bitterness. Again, quite highly carbonated. Noticeably absent is a hint of the beer’s 10.1% abv (a worrying trend). Too fizzy, rather clumsy and not a glass I could get to the bottom of.

I’ve been assured that Brewmeister’s beers won’t be featured by Beer52 again – apparently the deal with them was signed long before the recent revelations. Most of the other beers in the box were good, a few were fantastic and several were from brewers I haven’t had beers from before, which is kind of the point really.

I think Beer52’s offer is well-suited for people dipping their toe into the world of good beer. It’s a good place to start before ‘graduating’ or supplementing the subscription with one from a more specialist beer retailer, perhaps.

The great thing is that there are now a range of subscription-type services to suit you. If you prefer the community aspect and more in-depth knowledge and discussion of good beer, BeerBods might be more for you. If you’ve got specific tastes and want stuff as fresh as it gets, Eebria might be more up your alley. Or, if you already know your way around beer but want a bit of guidance, the curated boxes from the likes of BeerHawk might be more for you. But, if you like a ‘lucky dip’ approach that’s relatively cheap and you enjoy surprises, Beer52’s offer is pretty tempting (especially if you redeem the promotional code below).

Reader offer: You can get £10 off your first Beer52 box if you order using the promotional code ‘CRAFTY10’.

Disclosure: I was sent the box from Beer52 for free.