Melissa Cole wrote a great blog (an open letter, really) a week ago about the use of this sort of thing:
(Images courtesy of the excellent watchdog for dodgy beer marketing Pumpclip Parade) 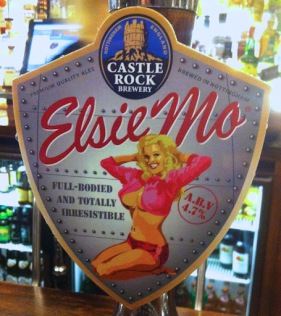 As this is a real pet hate of mine, I have to add my own feelings on this matter, not a ‘male perspective’ exactly, but hopefully one that is shared by other men.

When I see a one of these beers on the bar, I get angry and embarrassed in equal amounts. I get angry because this is exactly why some people think cask beer is for sad old men. I get embarrassed because, even if I order a completely different ale from the bar, people will think ‘Ah, this chap obviously shares the same sense of humour as the sad, dirty old man that designed the label for that other beer. That’s what cask ale drinkers are like.’ 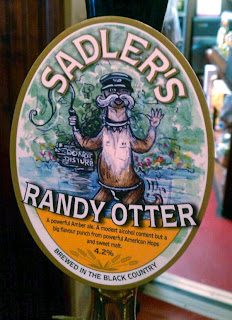 First, it isn’t all just a bit of harmless fun, because not all breweries see fit to market their beer in this way. And amongst those that do, not all of them use the kind of bawdy, seaside-postcard-from-a-time-land-forgot type of humour that we are apparently supposed to celebrate and cherish as part of our innate, cultural backwardness. Some of them, see above, are terrifying glimpses into the psyches of deranged and possibly quite dangerous individuals. The man who drew that Randy Otter one should be sectioned.

Secondly, it isn’t all just a bit of harmless fun, because it extends beyond the pump clips to the grubby, pathetic, middle-aged-boys that think this is ‘funny’, or worse still, sexually arousing. It simply exacerbates a tired old stereotype of a man going to the pub to ‘get away’ from his wife, drink beer, and stare at crudely-drawn pictures of women, otters, figures from folklore, whatever floats their boat.

Thirdly, it is not harmless, because it harms my eyes, my intelligence, and the idea of being ‘a good lad’ or ‘nice bloke’ or ‘gentleman’ that is instilled in most men by their fathers from a young age. If people want to look at pornographic images, that is absolutely fine. If people want to make silly names for things, be my guest. If people want to degrade themselves, the pub, and the beer they are drinking by needing to buy an ale called ‘Top Totty’ and leering at a child’s drawing of a woman in her underwear, they can FFFFUUU-ind themselves somewhere else to do so.
Finally, it is not fun, or at least any kind of measure of fun that I am aware of. This boils down to – and I’m sorry if I’m repeating myself, but it really does seem to be the core issue here – people enjoying looking at crappy, cartoon images of ‘rude things’. If pubs aren’t permitted to sell alcohol to those under the age of 18, they may wish to consider extending this to those whose mental age is below 18 as well.

Let’s all just move on, and embrace the British beer renaissance. Every day people are trying out cask ale and craft beer, and the last thing we want is for someone to think that the guy who designed ‘Rodger the Goblin’ represents the bulk of people who enjoy good beer.
What really gets to me is how stupid it is, and how it must drive away so many people from trying what may possibly be a good beer. Cynical as I am, I simply assume they are trying to sell off a bad batch of bitter by putting ‘a bit of blue’ on the pump clip. However, I’ve heard that some of these beers are all right. This is even more depressing, because it means they have been effectively reserved for those with the sense of humour of some kind of fist-testicle hybrid.
I am not saying BAN THIS FILTH because, frankly, we shouldn’t need to ban it, should we? We should simply be capable of rising above it. We’re British for heaven’s sake. We should be capable of a bit of class.