In my last post, I covered two fantastic bars in Bruges: De Garre and la Trappiste. Below are two of my other favourite places I visited in Bruges: Cambrinous and ‘t Bruges Beertje.

Cambrinous occupies one of those very ‘Bruges’ buildings: old red stone, zig-zagging to a tip like two sets of stairs at the top, oozing character and warmth. Some of the masonry on this particular building sets it apart. The King of Beer, Cambrinous himself, is depicted, straddling a massive barrel. Inside, a long bar overlooks a sunken seated area of booths and tables. We managed to get a window seat, where copper pipes and light fittings nestle in the corners.

The beer list here is extensive, 400+ at any one time, and my eye is drawn to a brewery recommended to me: Brasserie De La Senne. Taras Boulba is their ‘Extra Hoppy Ale’, and in the glass it shines like freshly squeezed fruit juice. From Saaz hops alone it manages to squeeze out lemon, grapefruit, mandarin, lime and orange, building to crisp, dry, peppery finish. It’s a stunning beer, destined for enjoyment in sunshine. 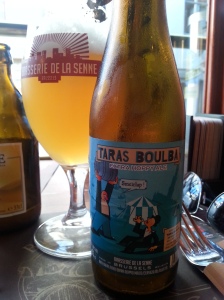 The food here was good too. Chicken and frites done simply but very well. Crisp skin on steamy chicken, crunchy fries and all washed down with the 2013 edition of Duvel Tripel Hop. Having missed the (by all accounts) sensation 2012 edition, I was eager to try this year’s interpretation. The hop bill is Sorachi Ace, Saaz and Styrian Goldings. The initial lemon/lime bittersweet balance finds depth in a silky, creamy mouthfeel, like lemon syllabub. Further in, it gains new qualities, a sharpness like a salad of peppery rocket and lemony vinigarette, before shovelling on pithy bitterness by the hop-kettle-full.

Cambrinous’ menu is large, the service is quick, and the food is good. Everything there is very reasonably priced, too, but that goes for much of Bruges. What I really enjoyed about Cambrinous was the way it remained welcoming to families and tourists, but also provided a fantastic setting for hardcore beer explorers. Everyone was welcome and the beer was fantastic.

This is The Place. You can’t go to Bruges and not visit Beertje. At least, that’s what everyone says. They’re right, too. It’s a truly wonderful bar.

The problem is, I had such a good time in Beertje that I somewhat shamefully forgot to take any photos while I was there. True, a great deal of beer had taken its toll on this weary traveller, but there was more to it than that. I remember at one point wanting to take a picture of the beer I was drinking at the time, Brasserie De la Senne’s Zwarte Piet, and feeling suddenly awkward about it. Without the convenient crutch of photos to show you what it’s like, I’ll try to describe what it was about Beertje that made me feel that way.

We initially tried to visit mid-afternoon, and found the place closed. This only exacerbated my thirst, and by our eventual return several beers later, I still felt as thirsty as I had done when I’d first found the place with its doors closed and beery secrets locked away. It was a hot night, and people were just vacating a table as we arrived. Thank goodness, I thought, because I couldn’t have stood and nursed strong beer in this heat. The air was thick with a warm fug and the bubbling swell of conversation. A tiny bar somehow fills one entire wall, with liquid miracles being dispensed as quickly as they could be found.

I could see why it didn’t open until later. This place had no patience for afternoon shoppers who had wandered off the main road. This was a place for the seekers; people who know, or want to. Acolytes, weary from their travel and bibulous exertions were slumped over tables with elaborate goblets on them. We come here to pray, you see. Pray that there is more to it all than just the day-to-day grind. Beertje felt a little like the pub of collective imagination, where the barman produces the exact drink you need from beneath the bar, like magic.

This is The Real Deal, I thought, as I had on several occasions whilst in Belgium. This is It. A real tavern, like out of all those books and scenes in films. Except that the staff here, studious fellows, seem more like librarians, or guardians of some mystic archives. Indeed, so small is the bar that they often have to descend into cellars below, presumably where their arcane library is. You can test their knowledge, ask them for things like this or like that, and they’ll present you with the exact thing you need but had no idea existed. Barmen nipping off to find this, that and the other all the time? Surely the service must be very slow, you’d think? Not a bit of it. It might be because the place is so small, but the whole operation runs like clockwork.

In the back room, there’s photographs mounted above the fireplace, in memoriam to the Beer Hunter himself, a man who introduced generation after generation to Belgian beer, and the potential to have an experience like this. When I saw those photographs, and tasted what that barman gave to me, I knew. I couldn’t start clicking my camera to and fro, it felt wrong, unseemly. This is The Place.

Bruges itself is a unique marvel. I’ve been to cities and towns with historical importance, picturesque beauty, and wonderful food and drink, but very few manage to keep all of that AND be a thriving tourist destination. Many have to drop at least one of those balls. You’d think that be particularly the case when one of the best things about the place is the beer. But maybe that’s part of why it’s managed to keep it all together. Almost everything in Bruges demands that you treat it with a certain reverence, the beer included. It’s a fun place, don’t get me wrong, but it also feels very grown up, thoughtful and comfortable with what it is.

The drinking culture here is driven by tourism certainly, but with no laddish swagger or uncouth excess. Overindulgence is almost compulsory, but you are encouraged to go about it in such a classy way that it doesn’t really feel like ‘going out drinking’. You just feel like you’ve spent all day putting your palate to work, enjoying sights and sounds, and there are few better things in life than that. Here’s to keeping it classy, and having a damn good time doing so.

Next in the Beer Diary: De Halve Maan brewery, Cantillon and bars in Brussells…