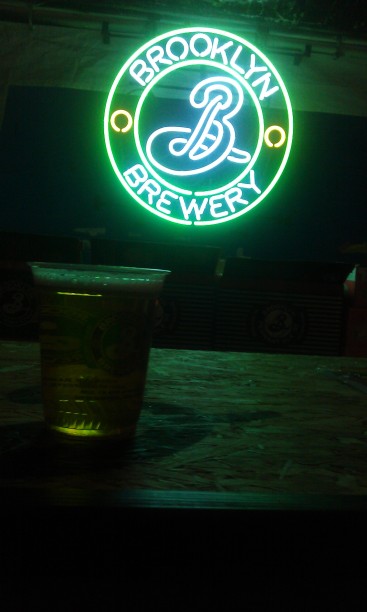 Who could have predicted this week’s Winter 2.0? Some know-it-all meteorologist no doubt, but us common folk have been left with our gobs smacked and our flabbers gasted. The worryingly chilly weather was the unfortunate setting for Tuesday evening’s #BrooklynFeast, an event heralding the return of Street Feast London, whose events were hugely popular last summer.

#BrooklynFeast was organised by Brooklyn Brewery and beer importers James Clay, bringing together the brewery’s beers and the capital’s burgeoning street food scene in a perfect hipster storm of Instagrammable wonderment. Top street food vendors including Bowler, Big Apple Hot Dogs, Rainbo and Bleecker St Burgers set up in a car park off Dalston Lane, which was transformed into an ersatz street of trendy gluttony. 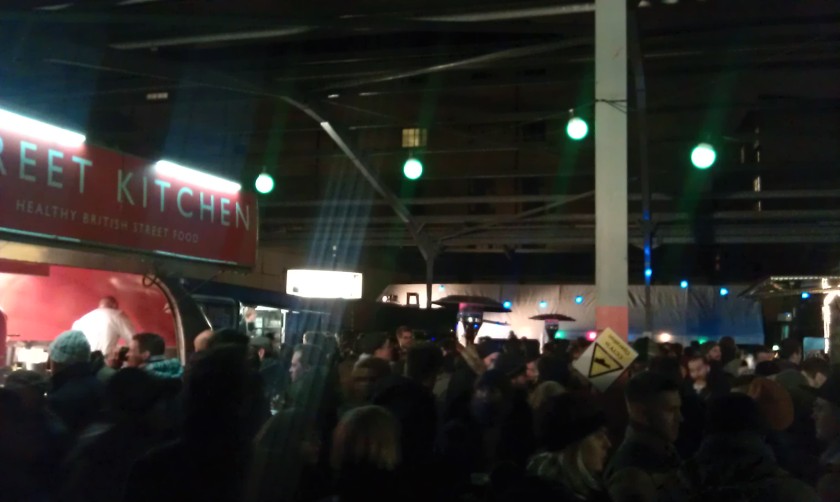 The bar at #BrooklynFeast (don’t worry, I’ll stop hashtagging it now) was stocked with eight of Brooklyn’s beers, each matched to a dish from one of the food vendors. The pairing menu below, featuring rarer brews such as Blast!, Pennant ’55 and the ominous There Will Be Black, was varied, well thought out and extremely appetising.

Below are a couple of the food and beer pairings that I tried:

There Will Be Black and Smokey BBQ Wings from Street Kitchen

These wings had a thick, crunchy batter and were dripping in a decadently thick BBQ sauce that was so delicious it could have easily started its own religion overnight. Like all great wings, just as you bit into one, the meat fell away and you were left holding a bone in your greasy fingers, grinning like a fool.

There Will Be Black is a 7.5% Black IPA (or Imperial Black Ale or Hoppy Stout…) that marries the rich, luxuriant body of the brewery’s seminal Black Chocolate Stout with a ferocious hop cannonade of Williamette, Pacific Gem and Motueka hops. It is an outstanding beer, rich yet with a silky body and palate-tingling hop finish. It supercharged the BBQ sauce on the wings, making everything sweeter, stronger and thicker, before scouring your palate clean with hops so you can do it all over again. A really exciting food and beer pairing.

Big Apple Hot Dogs were a big hit on the night, and had an enormous queue late into the evening. This is with good reason: these are the best hot dogs I’ve ever tasted. Forget slimy, slippery pig product tubes, these are the real deal. Gourmet, genuine frankfurters of pork, beef or pork-beef-blend. The excellently named Dog of Phwoar is a limited edition, spicy beef concoction that is best described as being like chorizo, but beef.

Brooklyn’s ’55 Pennant Ale, named after the ’55 New York Dodgers world championship-winning team, is an English-style pale ale with New World hoppy muscles. It’s a great all-rounder, offering crystal malt sweetness, dry, lager-like refreshment and fresh, hoppy bite. It met the spicy beef head on, but instead of fighting for dominance, they grabbed each other and danced across my palate. The beer softened the peppery blows of the beef without reducing the flavour, and cleaned the salt from my palate to boot. Not as exciting as the BBQ wings and TWBB, but a much simpler, straightforward match that worked just as well.

It was an exciting event with a lively crowd and a great atmosphere. I can hardly hold the weather against it, but it did make a big difference to how long people were willing to sit or stand outside, heaters or not. My only other complaint would be the number of people. The event encouraged people to try out smaller amounts of different foods and beers and keep coming back for more. This is a great idea, but the event had slightly too many people for it work smoothly. If they had set a slightly lower capacity, or had two sessions (one in the afternoon for trade, for example), the queues would have been shorter and people would have been more inclined to stay longer and try more of what was on offer.

That said, it was a great combination of food and beer in a friendly environment, and hopefully Street Feast will organise more events like this with local London brewers. Their ‘takeover’ at Camden Town Brewery last year was a fantastic collaboration, and Brooklyn Feast did an excellent job of bringing food and beer matching to the people in a cool, accessible format. More of this sort of thing, I say.