Skip to content
There is a firm connection in my mind between beer and rain. Why? It’s hard to say. It may be something as subconscious as the association with water. It could be more abstract; that these are two things the British are world-beaters at. I think it’s most likely to be memory association. There have been many occasions when, in pouring rain, I have sought sanctuary in a pub. Watching the rain bucket it down whilst sat in the cosy warmth of the pub with a pint is a memory almost all of us can recall if asked.
My time in Cornwall last weekend provided ample opportunities for this. We may moan a lot about the weather, but it is with perfectly good reason. As I write, the South West of England is still, literally, awash with reports of floods and torrential rain. The effect on the roads, public transport and the rail networks has been predictably nightmarish, despite it seeming to occur on a yearly basis now. It was here that I came a cropper.
I was visiting St Austell Brewery with the British Guild of Beer Writers, with the chance to tour the brewery with Head Brewer Roger Ryman and attend the Celtic Beer Festival at the Brewery the next day. Due to all manner of boring travel-related nonsense that is not worth describing, I missed the brewery tour and was in a rather sour mood by the time I got to our hotel in Truro. However, there was still a marvellous beer and food dinner to be enjoyed at the Pandora Inn that evening, where I got to meet and chat with two of the lads (Rob Orton and Adam Lumb) from St Austell’s microbrewery plant. As so many brewers are doing now, St Austell are using a sort of pilot testing plant to brew one-off beers with the intention of finding long-term new core beers. The menu that evening matched five new beers from the microbrewery with five courses of local cuisine. The Ruby Jack Rye – a stunningly rich, smooth and well-conditioned red rye ale – was my personal favourite. Others, like the Smoking Barrel Rauchbier and Bad Habit Abbey Style Tripel, were also excellent.
The 14th annual Celtic Beer Festival took place the next day, and was held in the cavernous cellars and tunnels that form what were the old storerooms. Over 150 beers were on offer and more than 30 of those were from St Austell itself, including beers that the microbrewery have been working on. Whilst wishing to avoid that particular cliché about arranging drinking occasions within brewing premises, I can categorically state that St Austell run an absolute belter of a beer festival. The atmosphere, with a noticeably younger crowd than many beer festivals I’ve been to, was as lively and occasionally as rowdy as any night out. Several levels of storerooms made for low-ceilinged, noisy drinking halls, and one had a stage with live bands playing. Everyone I saw that day had a smile on their face. The atmosphere was amazing, and all the more remarkable considering the amount of time that many people had been waiting outside in the rain for over an hour to get in.
More importantly, there is the matter of the beer available. I had been expecting a mix of Cornish, Welsh and Scottish beers, but the selection was far wider. Obscure American imports such as SKA brewing Pinstripe Red, Sierra Nevada Kolsch and Stone Levitation IPA were available alongside tamer fare like the brewery’s own Tribute, Proper Job and Trelawny. All the beer I tasted, no matter its origin, tasted fresh and excellently kept. It really is some of the best beer I’ve tasted at a beer festival, and it was a wide variety of cask and keg. I will share my short, festival-friendly (read ‘scribbled on programme’) reviews in next week’s Rum and Reviews Magazine, though I will give special mention at this point to Bodmin’s own Harbour Brewing Co and their delectably decadent Chocolate Stout. Easily the equal of Brooklyn’s Black Chocolate Stout in terms of flavour, this 9% beast is so light-footed you could swear it was half the strength. The rich, indulgent chocolate flavour is reassuring evidence of a large amount of highest-quality chocolate malt. It really is sensational. St Austell’s range of Abbey-style beers, including the aforementioned Bad Habit, are also fantastic. 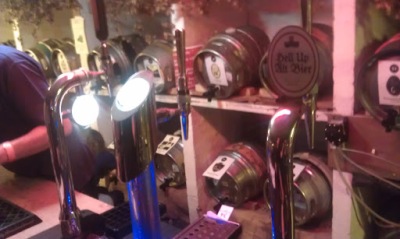 Finally, I would like to pay tribute (oh, come on) to Head Brewer Roger Ryman himself. When he wasn’t serving behind one of the festival’s many bars downstairs, he would be upstairs, happily having his ear chewed off by bloggers and fans of the brewery all day long. Cheers to Roger and the brewery for organising such a fantastic beer festival.